Direct injection engines are becoming more and more popular because car manufacturers can design them to provide better fuel economy and cleaner emissions, and deliver increased power output when you need to floor the gas pedal.

Compared to previous generation fuel injection systems, or even older carburetor setups, direct injection engines have fuel injectors that spray fuel directly into the combustion chambers, and at much higher pressures. This type of setup allows the car’s ECU to more finely control the amount of fuel entering each combustion chamber, which results in better air/fuel ratio management and a cleaner, more efficient burn as each cylinder fires off.

Since direct injection engines no longer have any fuel flowing through the intake ports and past the back of the intake valves, carbon deposits and oily residue tend to collect around these areas. This wasn’t an issue in older engine designs because the fuel and its additive detergents could easily wash out any excessive carbon buildup. Too much carbon caked around the intake ports restricts the air from flowing as freely as possible and keeps your engine from delivering the mileage and power output you’re expecting from it. Carbon deposits around the back and stem of the intake valve can also lead to misfires and timing issues when the valve has trouble moving smoothly.

In order to address these issues, some newer engine designs have gone as far as using direct injection in conjunction with port injection so that the intake valves can still get regularly cleaned by the fuel passing through the intake ports.

Carbon buildup is more prevalent in vehicles that aren’t driven hard or long enough to reach proper operating temperatures. This can happen if you’re frequently using your vehicle only for short trips or driving lightly around town.

The metal around the back of the intake valve takes a lot longer to heat up compared to the metal lining the combustion chamber or the exhaust manifold. Without enough heat burning off the carbon deposits and soot that gets stuck around the intake valve, and very little air passing through the intake manifold to help dislodge the stubborn residue, the area just keeps on getting caked with layers and layers of carbon buildup over time.

Carbon buildup also gets worse as the car piles on the miles and as its engine seals become worn out. This usually results in more blow-by gasses and oily residue settling on the back of the intake valve and around the intake port.

How to Prevent Carbon Build-up

If you have a direct injection engine that is prone to developing excessive carbon buildup, one of the easiest things you can do is let your engine run hard past 4,000 rpm on a more regular basis. Subjecting the engine to higher loads for longer periods of time ensures that it gets hot enough to burn up and knock some of the carbon loose.

You also need to make sure that your ECU has the latest software with the right spark and timing updates. In many engines, this relatively simple step can eliminate the carbon buildup issue altogether.

Using good quality synthetic oil helps because it doesn’t burn up as easily in extremely high temperatures, minimizing amount of oil vapor and soot that can clog your intake ports. More frequent oil changes also ensures that the engine is always running smoothly and burning fuel as efficiently as possible. Constantly having dirty oil in your engine will also increase the likelihood of sludge and residue getting stuck in places where you don’t want.

Using high octane fuel is also a good idea since it burns hotter than lower octane gas, thus leaving less un-burned residue. Getting a good spark is also essential to proper combustion, so check your spark plugs and make sure they aren’t too fouled up.

If you’re already experiencing some of the common symptoms caused by excessive carbon buildup on direct injection engines, the only way to fix it is to bring it to an experienced mechanic who can remove the intake manifold and physically clean out all the carbon that has built up around the intake valves. In some cases, these symptoms can be observed in as little as 20,000 or 30,000 miles. So if you’re starting to notice slight misfires on cold startups, sporadic hesitation or even stalling, it’s probably a good time to drop by Paul’s Motor Car Service and have your intake valves checked.

“Carbon build up on intake valves in direct injection engines is an industry wide problem. Regular oil changes every 5,000 miles with synthetic oil and high quality fuel can help prolong the inevitable.”

At Paul’s Motor Car Service, we offer an intake valve cleaning service.  When possible, we use a camera inside the intake manifold to visually inspect the valves for carbon buildup.   In most cases, the intake manifold will be removed to gain access to the back of the valves.  The coils and plugs are removed next.  First we physically Scrape away the biggest chunks of carbon, then the next procedure is to blast them clean with a walnut shell media.   Once the valves are clean like new, everything gets cleaned out good, and the Intake and ignition get reinstalled.  If the Spark plugs are old, now is a good time to replace them as there is no additional labor.

Benefits of having the carbon removed from your valves

Below are pictures of a VW CC with around 40k on it.  The car ran rough at idle on cold starts, sometimes set the check engine light for misfires. The situation got worse and it would not clear up when the engine warmed up.   We removed the intake air temp sensor, went in with a camera to inspect.  Once we saw how bad the carbon deposits were, we performed the carbon cleaning service. 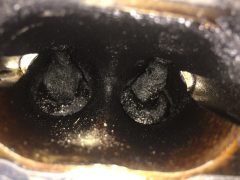 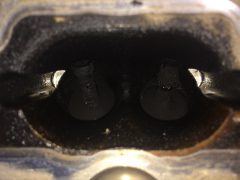 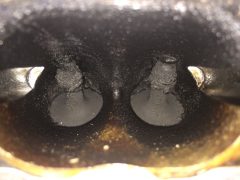 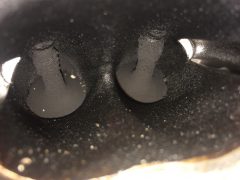 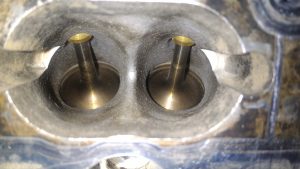 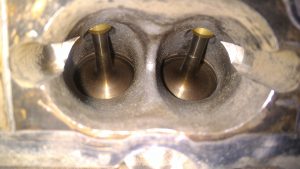 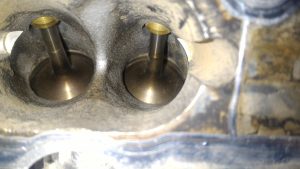 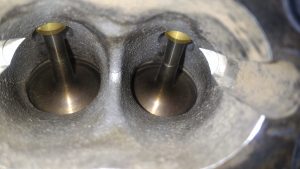 Where friends send their friends!